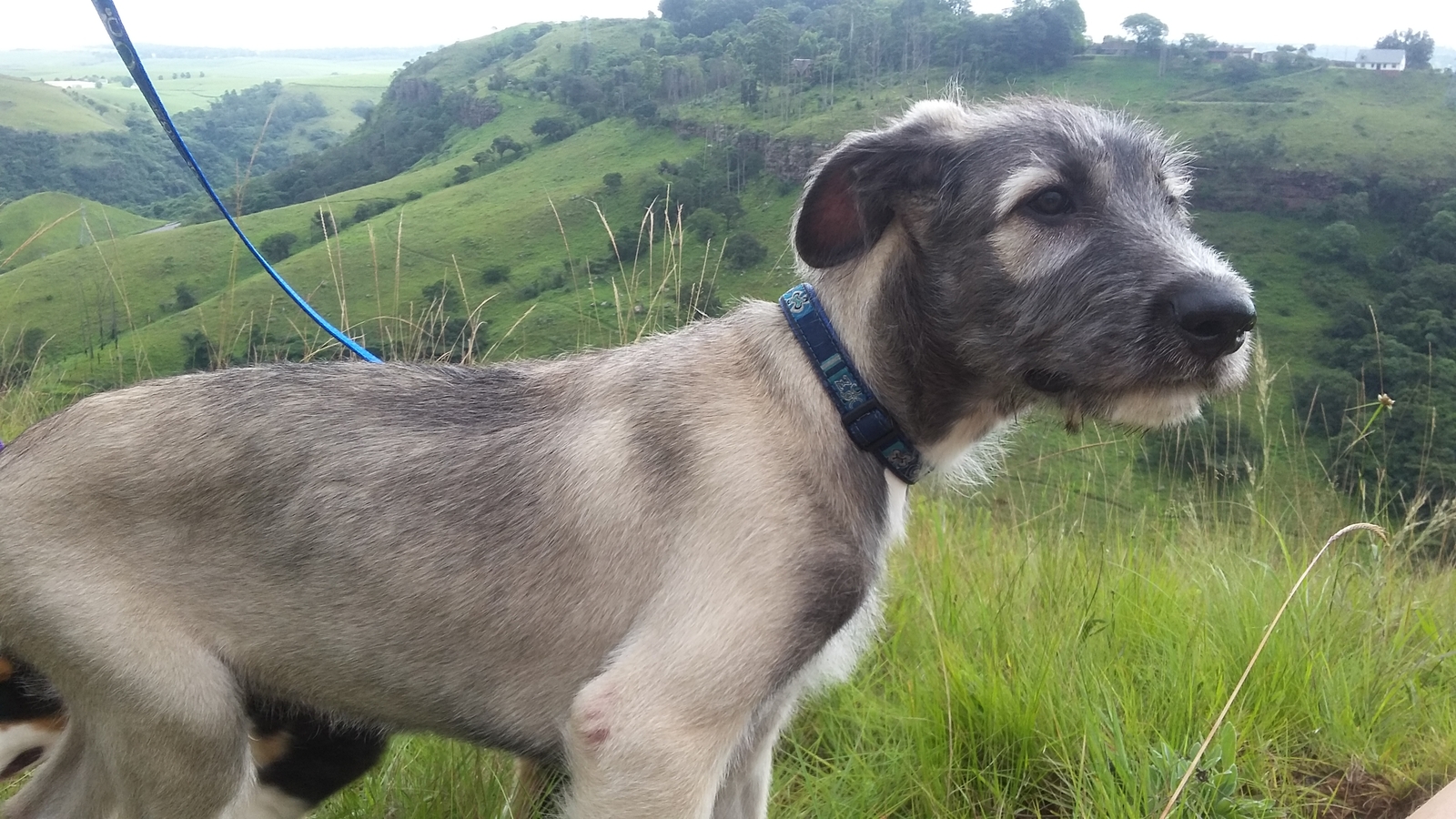 Read about our rescue dogs

Successful rescues/rehomes over the last 10 years

2009
July
Male IW rehomed as a young dog in dreadful condition. He was rehomed because he chewed up his bedding and killed some chickens and was considered  a bad influence on the other dogs. When he went to his new home he was terrified of everybody and everything, especially a raised voice or hand, even though not directed at him. He was also in very poor health, and it took his new family two years to get him to where he is today, a happy, healthy for his age,  well socialized dog.

and several years later in his prime

“Gryphon is now 9 ½ and doing well despite his atrial fibrillation and leaky mitral valve. He takes 16 tablets in the morning and a couple at midday and at night. With his heart under control he trots around with the other dogs and occasionally blesses us with zoomies!  He is the biggest love bug in our home”.

2010
June
Young female IW rehomed due to owner moving away and leaving her at the property, only checking on her every couple of days to replenish food and check water. She went to her new family with lots of health issues which made her miserable, but those were all attended to and she was put onto a suitable diet and soon she was enjoying life with two walks a day where she made lots of  new friends, both two and four footed.

Sula seen above at 9 years of age, basking in the sunshine in the home where she was so loved and that she was so happy in. She crossed the Rainbow Bridge shortly before her 10th Birthday.

2012
January
IW male rehomed in W Cape
January
IW male rehomed age 18 months due to owners emigrating. He was not in the best of health when his new family took him and after several years he was eventually diagnosed with suspected Degenerative Myelopathy. The scan also showed a dual inguinal hernia. The advice was to euthanase him but the family  were insistent that he be given a chance. There was a specialist veterinary surgeon visiting Onderstepoort who had previously done nine of these tricky operations successfully and agreed to take on a tenth. The operation was a success and it was found that the hidden hernia had been the sole cause of all his problems and discomfort over the years.

Gandalf when he was first rehomed

Above, Gandalf fit and healthy

Mum, Rosemary, says, that at long last he is completely well. He runs and plays more than ever before and is reliving his “childhood”. Our special boy is a loveable gentle giant

Young IW male rehomed as he was being bullied by owner’s other dog.

3-year-old female IW adopted from SPCA, Western Cape where she had been confiscated from her owner who was not taking adequate care of her due to lack of funds

Mollie, happy in her new home

December
Male Deerhound and female Greyhound adopted from SPCA Kimberley had been used for hunting so were rehomed with a family in KZN that had a large secure property with no other animals
2014
January
Young male IW adopted from the Barking Mad animal santuary and rehomed.

2014
November
Young male IW rehomed. He had been given away by the farmer who bred him to the daughter of a family. When the daughter left home she was unable to take him with her and he was too much work for her parents.

Above   Rory on the day he arrived at his new home, meeting his new fur family Paddy the IW and Rusty the Airdale

“He was a sorry sight when I collected him in Kroonstad, he was soaking wet from being driven to meet me on the back of a bakkie in a storm. Closer inspection at home revealed that one of his incisors was broken off. I am grateful that his owners responded to the IW club’s request to rehome him. He is truly a gentle giant and special companion”.

July
2-year-old male Lurcher adopted from SPCA Heidelberg
August
Lily, 2-year-old female Lurcher, adopted from SPCA Nigel
August
3-year-old male IW rehomed from appalling conditions. He was in extremely poor condition, kept in a small compound with no bedding, badly under nourished, shivering from the cold and neglected beyond belief.  Since being with his new family he has had extensive veterinary treatment.  He was emaciated and in pain. He was put on a correct diet, inoculated, treated  for a bad ear infection due to mites, and a “hair plug” where the hair had grown into the ear canal, had major dental treatment, his nails were so long that he could not walk properly, anal glands were badly impacted, he had an open sore on his hindquarters, an inflamed penis, his coated was matted and full of burrs, his pads had tips of broken thorns embedded in them  plus, cuts and cracks from the gravel that covered his enclosure.

A sharp piece of bone was removed from between his teeth at the back of his jaw. It was  then decided to wait a couple of weeks before neutering him to allow him to gain some more weight and recover from all that he had been through. During the waiting time, however, he started retching and pacing and showing signs of pain.  X-rays were inconclusive so he was taken for an MRI scan which revealed  an obstruction. He underwent emergency surgery and the obstruction, which included plastic sacks, pieces of sharp bone, food wrappers etc., was removed.

Debbie tells us that since he was discharged after the operation they have never looked back.  In her words: –    Braveheart is a 90-kg pup, loving gentle boy. Scars remain, he cringes at raised voices and if touched suddenly, his entire body jerks, as if expecting a blow, but he has come a very long way in a year, and we trust, as time goes by, he will overcome the fears that remain. He is a great companion and self-appointed protector.

Below: – In his new home, enjoying life and being loved, with a brighter future ahead

Rufus, a 6-year-old IW cross, adopted from Purrpaws for Life. Rufus was born at the sanctuary when his mother was brought to them heavily pregnant.  Somehow, he always got overlooked, but when we found out about him we set out to find him a forever home.

In the car on his way to a new life

October
Found good homes for a litter of six puppies from an accidental brother/sister mating. The “breeder“, sold the pair together to first time owners, and told them they would be fine together as Wolfhounds are unable to mate naturally!!!!
December
Helped with another accidental mating with advice during the whelping and raising of the puppies until they went off to their new homes
2017
January
6-year-old female Lurcher adopted from SPCA Benoni
June
Female IW cross adopted from SPCA Garden Route